AHHS is now open during our regular hours of 12-6 on Tuesdays-Fridays and 12-4 on Saturdays.

*If you are looking for a lost pet or a Return to Owner via Animal Control (ACO), please ring the doorbell and someone will assist you during our regularly scheduled hours.

In 2017, Almost Home saved 92.7% of the pets that needed its help. This is calculated according to the Asilomar Standard, which reflects options for animals including adoption, transfer and return to owner. The data provides a breakdown of the health and adoption status of every animal in our care.

Almost Home’s lifesaving rate (93%) is consistently several times above the national average of 60%, and above the 90% standard to qualify for the label of “no-kill” shelter. This number represents the percentage of pets served by AHHS with a positive outcome such as adoption, transfer, or return to owner. Reasons an animal might leave the shelter other than adoption include being transferred to another (sometimes breed-specific) rescue or a lost pet being returned to its owner.

AHHS is especially proud of this number because it has no control over the health or temperament of the pets that it receives as strays. In 2017, Almost Home spent more than $40,000 to treat those pets that arrived sick or injured and is determined to give every pet a second chance at a forever home.

Almost Home never euthanizes a pet due to space or time considerations. However, AHHS must euthanize some pets each year that are either too ill/injured to be saved or that would pose a risk to public safety. 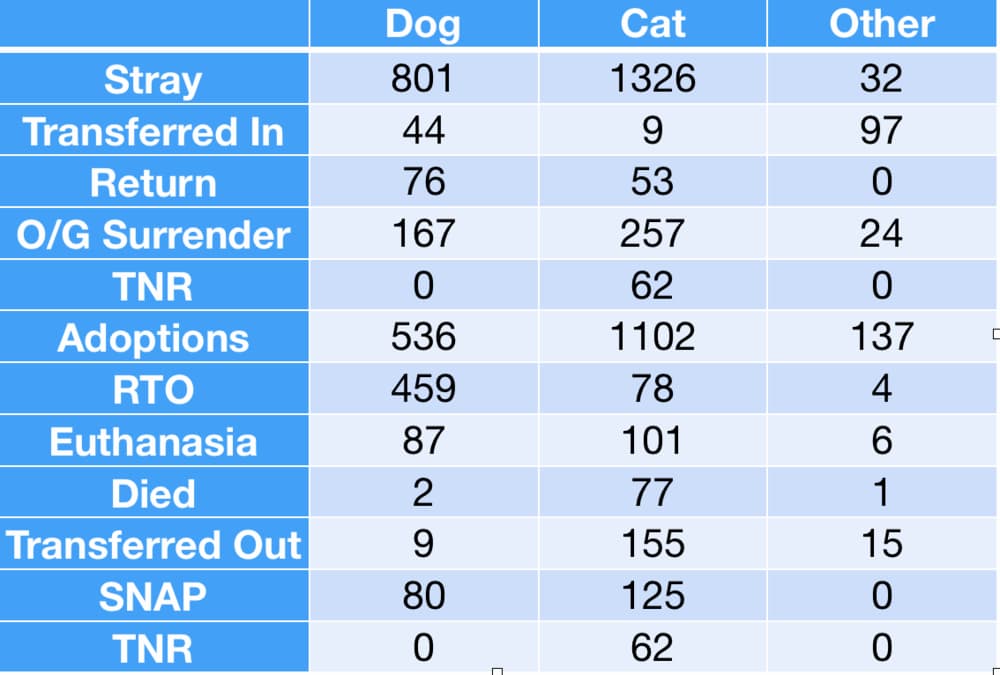 Pets transferred in arrive at Almost Home from other shelters or rescues.

TNR = Trapped, Neutered, and Released and typically refers to cats only

How long do pets stay at Almost Home Humane Society?

Almost Home has no time limit for how long pets may stay at AHHS.  All stray pets are subject to a 5-day holding period in an effort to reunite each pet with its owner.  After 5 days pets may go up for adoption as long as they are healthy and friendly.  The average length of stay for pets in 2019 was 31 days. Pets stay at Almost Home until they find the right forever home and in 2019 Almost Home's life-saving rate was 95%.

How is AHHS funded?

Almost Home holds contracts with the cities of Lafayette and West Lafayette to house stray pets. These contracts provide 30% of the annual budget for AHHS. The remaining 70% of the budget is dependent upon adoption fees, services and donations from the public. Almost Home is a private non-profit organization and is not affiliated with any national organization.

Almost Home’s lifesaving rate for 2019 was 95% which is above the 90% standard to qualify as a no-kill organization. AHHS is an unlimited stay humane society that accepts all stray pets brought to its doors regardless of health, age, or temperament. Thanks to the generous donors who support our injured animal program, Almost Home is able to treat many illnesses and injuries and the AHHS animal care staff go to great lengths to work with our behaviorally challenged animals. However, some animals are still euthanized each year either for medical or behavioral reasons.

How many pets does AHHS take in each year?

Why does Almost Home charge an adoption fee for pets?

Almost Home makes every effort to ensure your new pet is ready for life in its home.  All of our dogs and cats are spayed or neutered, microchipped, vaccinated, up to date on flea/tick and heartworm preventative, dewormed, and treated for any illnesses or injuries prior to adoption.  The cost to prepare an animal for adoption is much higher than the adoption fee.

What are the adoption fees for pets from AHHS?

How does AHHS determine the age and breed of adoptable pets?

Most often pets arrive at Almost Home as strays.  Age is estimated based upon the amount of tartar on teeth as well as the physical condition of the pet.  Breed is an estimation based upon the size, body shape, and coloration.  Almost Home does not advertise any dogs as a particular breed of dog because we believe every dog is an individual. Research has shown that dog breed traits are not always present in mixes of any particular breed and it is difficult to discern what breeds created a mixed breed dog. AHHS cannot guarantee the breed or age of any pet.

Almost Home Humane Society is classified as a limited-admission shelter.  AHHS accepts all pets found stray within the cities of Lafayette or West Lafayette.  However, Almost Home can only accept owner-surrendered pets on a case-by-case basis dependent upon the pet and shelter space. To find out about surrendering a pet and to make a surrender appointment, call 765-474- 5222. AHHS only accepts owner surrenders by appointment and may not always be able to accept owner surrendered pets.

I’ve found an injured/orphaned wild animal. Can I bring it to AHHS?

Almost Home is not authorized to legally handle wildlife. Any orphaned or injured wildlife, or questions regarding wildlife should be directed to a licensed wildlife rehabilitator. You may contact Wildcat Wildlife Center at 765-491- 2351 for information on wildlife, or click here for a list of permitted wildlife rehabbers.

Can I report suspicions of animal cruelty AHHS?

May I adopt a pet as a gift for someone else?

Adopting a pet is a personal decision and a lifetime commitment for the adopter.  Almost Home feels it is very important to make a good match between adopter and pet and this often must be done in person. If adopting for a gift, the adopter of the pet must be willing to commit to the pet in the event the person for whom it is intended doesn’t want to take ownership.

Do you sell pet supplies at Almost Home?

Yes. Almost Home has a small onsite retail store with everything you might need to get your new pet settled in it’s home. Everything from starter bags of pet food and litter to toys and leashes.

What is a working cat?

*Due to COVID-19, AHHS will not be offering owner-request euthanasia at this time.

AHHS offers owner-requested euthanasia by appointment for a fee dependent on size.  For more information on this service please contact AHHS at 765-474-5222. For private cremation of an owned pet, there is an additional fee.